Length, length, long had you heard of Manu Pärsinnen. Very, very, very surprising because Manu's music video of the summer hit “Get Lucky” of the French duo “Daft Punk” on the Vectrex:

a review: Manu developed over the years 2000 to 2004 a variety of game demos, the demos were each at an early stage. Completed he had the game VecSport Boxing. Manu listed all its developments in a kind Programming Biography, which is still on the web online today. After nine years pause the music video is a nice jump for the Vectrex in modern times . Whether this is a re-entry into the Vectrex programming and will be more to come from Manus page?

Who his own called a VecFlash or VecMulti and wants to use his Vectrex as Jukebox, can the ROM (Binary) the music video download. must sing one but himself, this one song lyrics. thank you, Manu and Yzi for the great idea and nice implementation and a salute to Finland!

After the summer lull and the last post there are various interesting news and current topics for Vectrex, I here once loose enumerate:

Retrocade Magazine before from
Organised by Rob Maerz Vector War proceeded without major abnormalities, as in previous years, the Forum of Retrocademagazines for carrying and transmission of high scores was used. Now threatens the Retrocade magazines and all the Forum Off: As in the forum should be read by you, creates Rob Maerz it in time no longer, create the quarterly Retrocade Magazine and is this discontinue. To fall for him away revenue and plans resulted Rob, close the Forum. What happens next with the Vector was then, is currently unclear.

Classic Game Creations: No more orders
Speaking at bad news: Recently I reported here, that John Donzila to 31.12.2013 will close its platform Classic Game Creations. After the announcement of the end John was filled with orders almost, so that John has pulled the emergency brake and he already stop accepting orders. The successor is being discussed, hopefully it continues in some form. Surprisingly, it has the Website Classic Game Creations learn even an update, but the site is still under construction and a download option for its various Vectrex title, there are not yet.

Vector Patrol: Beta version
The Belgian developer Kristof Tuts has recently provided a beta version of its Vector Patrols to test. The me present trial is already making a very good, stable impression. Despite the completely different display options, the implementation is graphically re amazingly close to the original Moon Patrol. In particular, the Parallax-Scrolling, the 1982 a real eye-catcher was, is reacted fine with a total of three levels and the depth effect is good out. All of Moon Patrol ago known game elements are included, 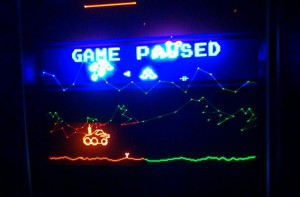 ranging from craters, UFOs with shots and bombs, of, Tanks and some more. Here the first foretaste of a screenshot Vector Patrol with color film. More screenshots are on Kristof's website.

The completion date of Vector Patrol is not yet known, but it will be no longer a year but only by months.

From 8. August to 25. August glowing not only the barbecue coals, but also the Vectrex consoles: For the third time the Vector War takes place. Vectrex players around the world compete for the title.

Rob March, Represent the retro platform http://www.retrocademagazine.com carries the vector of War III. They will play a total of 13 games. Which games will be there, decide the player himself: Currently, the Forum des Retrocade magazine finds the choice of games instead.

The Vector War is not only 'what experts, but for all the Vectrexbesitzer
have fun playing and want himself and measure at other. It is
a good opportunity, the games to pull off the shelf and the
to experience video games as in the 80s: Yourself more with the more simple games
deal to improve de gradually and then eventually to a
herauszukitzeln or other highscores. However, a hurdle to the set threshold scores (thresholds) represent, you have to achieve, to participate.

Who just Vectrex games so far calls his own, can significantly increase its number matches with a Multicart and is ready to keep up the Vector War III. A 72-in-1 Multicart is of inter alia Andre Coleman offered.

More information in English Retrocademagazins Forum. Join – play with!
___________
addendum on 05.08.2013:
The game selection is completed, be in Vector War following 13 Games are played:

laid hardly the virtual pen, again a piece of news: To be held until the end of July Retro Challenge Frank Buss has the puzzle game Bloxorz ported to the Vectrex. The recently published trial of Bloxorz already made a very good impression:

2007 had the Aussie Damien Clarke (DXInteractive) The Puzzle Bloxorz developed as a Flash application: The player has a rectangular block rolling around in the field and store it in a marked square. In Damien Clarkes Original-Bloxorz challenge the player 33 different levels with bridges, Teleporters and switches. Interestingly, this reads “Making of“, in which the Flash developer Damien also reveals, that it was all about a working title for the difficult-to-pronounce Bloxorz.

Frank Buss made recently with his CrazyCartridge Furore, he makes the hardware but not halt, but programmed for the Vectrex a port of Bloxorz and shall in unconventional and interesting ways:
Converting created with Inkscape SVG Illustrations by Phyton. Vectrex programming in C and not in 6809 assembler. Precalculation a 3D rotation using a small Java program. Using these tips and tricks, the rapid development period of just two weeks declared – mind you “so alongside”. Frank Buss calls itself “Fingerübungsprojekt” and describes in his blog in detail, as he has taken, his ways and wrong ways and provides interested parties the source code and the trial as a program (Binary) to disposal. The current trial involves rolling the block in 3 levels. Only after a break Frank is the game press ahead with. The data of a total of 34 Level has Damien Clarke provided him kindly.

Thanks Frank, for this successful and well-documented Finger Exercise!

For the Vectrex there are some hardware: Modded controller, Homebrew-Lightpens, Multicarts, VecMulti, AtariVox + and various more. What was missing, and there is not yet in series: An expansion board with processor, can be swapped in the calculations. That could change soon:

Frank Buss currently adjusts its CrazyCartridge an die Vectrex an. When Crazy Cartridge is a general purpose for old video consoles and home computers expansion card with 8MB RAM and SD Card, which can be used as a flashable Multicart. Moreover, the Crazy Cartridge has an ARM Microcontroller, the one with 48 MHz provides a significant computing power. For comparison: The 6809 CPU the Vectrex uses 1,5 MHz.

The development of the cartridge is not yet complete, currently Frank Buss is working hard on a Demo, with it at the currently held Retrochallenge (Summer Games 2013) want to participate. Frank goes new paths, so he put a C compiler for the 6809 and develops its demo in the C programming language. Perhaps that speaks later on other developers, which have so far shied away from the rather laborious assembly programming.

Who more to Franks project “CrazyCartridge” want to read, the place on the specially for the Crazy Cartridge dedicated website numerous information. Also provided online has Frank accurate About his development Demo including first C source code.

The hardware costs are quite high for an additional card, Frank is that financing via crowdfunding (“Schwarmfinanzierung”) do. If the time has come, I will definitely be doing… …and of course report here again.